Missouri Affidavit as to Death of Grantor

The Nonprobate Transfers Law of Missouri, Sections 461.003 to 461.081 RSMo (2012) has been in effect since 1989. While the law is specific on requirements for the beneficiary deed, it is less clear on the process for accepting the real property rights conveyed. Section 461.062, however, offers some guidance.

Under the Nonprobate Transfers Law of Missouri, <b>grantee beneficiaries</b> who survive the deceased <b>owner</b> by at least 120 hours gain ownership of property designated as "transfer on death" by function of law, upon the <b>death of the owner</b> (461.042). There are two primary reasons to formalize this transfer of ownership, even though it is supposed to happen automatically.

First, it is always a good idea to record changes to the named owner of real estate, providing notice to the public that the former beneficiary now holds title to the land and keeping the ownership history up to date. This ownership history is called the chain of title. A clear chain of title (with no gaps or interruptions) makes property easier to sell by reducing the chances of unexpected claims from others trying to assert their ownership rights.

Then, by recording an affidavit asserting the new claim on the title, the beneficiary lets the local assessor or taxing agency know that, as the record owner of the unique parcel of land, he/she is now responsible for the property taxes. Land owners must remain current on property taxes or risk penalties such as fines, liens, and possibly losing the real estate in a tax sale, so it is essential that the tax statements arrive at the correct location.

The question arises, then, of exactly how to let the relevant <b>transferring entities</b> know about the owner's death. There is no statutory form or action required to effect the change, but 461.062 provides some guidance for written requests to formalize these transfers. For the most part, it involves recording an affidavit that includes the grantor owner and grantee beneficiary's information, recording details about the beneficiary deed, and specifics regarding shared ownership of the property. To support the affidavit, the claiming beneficiary must also include a copy of the recorded beneficiary deed and a death certificate for the owner as well as any deceased beneficiaries.

When presenting the affidavit and supporting documents for recording, be sure that they will update the tax records as well. If not, send a copy of the death certificate and the recorded beneficiary deed to the county assessor, too.

In short, by setting aside some time in the days following the death of the owner (preferably within the first six months) to complete and record a Missouri affidavit as to the death of grantor, the beneficiary protects his/her interest in the newly-acquired real estate, while limiting the likelihood of future problems with taxes or title.

IMPORTANT TERMS as defined in 461.005
A grantee beneficiary, also called simply a beneficiary is a person or persons designated or entitled to receive property pursuant to a nonprobate transfer on surviving one or more persons.

The death of the owner in the case of joint owners, means death of the last surviving owner.
The owner is a person or persons having a right, exercisable alone or with others, regardless of the terminology used to refer to the owner in any written beneficiary designation, to designate the beneficiary of a nonprobate transfer, and includes joint owners. The provisions of this subdivision shall apply to all beneficiary deeds executed and filed at any time, including, but not limited to, those executed and filed on or before August 28, 2005.

A transferring entity is a person who owes a debt or is obligated to pay money or benefits, render contract performance, deliver or convey property, or change the record of ownership of property on the books, records and accounts of an enterprise or on a certificate or document of title that evidences property rights, and includes any governmental agency, business entity or transfer agent that issues certificates of ownership or title to property and a person acting as a custodial agent for an owner's property.

Deeds.com Missouri Affidavit as to Death of Grantor Forms Have Been Updated as Recently as Friday March 12, 2021

Ron D. said: No choice since the county does not seem to provide info you supplied.

Reply from Staff: Thank Ron, have a great day!

Arthur M. said: Efficient and easy to use. Thanks.

Kevin L. said: All the paperwork I need......Great service

Angela B. said: Great forms! Quick, easy, and to the point. The completed document, when printed out, looks really professional.

Robin B. said: Nice and easy

Richard V. said: It was very easy to get the documents which I needed.

Select County or Independent City where the property is located. 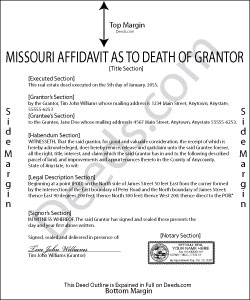